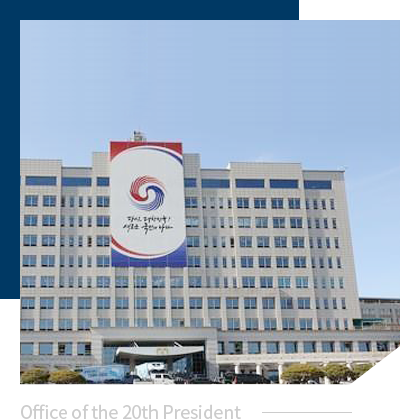 The President of the Republic of Korea, elected by nationwide, equal, direct and secret ballot, stands at the apex of the executive branch. The President serves a single five-year term, with no additional terms being allowed.

This single-term provision is a safeguard for preventing any individual from holding the reins of government power for a protracted period of time. In the event of presidential disability or death, the Prime Minister or members of the State Council will temporarily serve as the President as determined by law.

Under the current political system, the President plays five major roles. First, the President is the head of state, symbolizing and representing the entire nation both in the governmental system and in foreign relations.

He receives foreign diplomats, awards decorations and other honors, and grants pardons. He has the duty to safeguard the independence, territorial integrity, and continuity of the state and to uphold the Constitution, in addition to the unique task of pursuing the peaceful reunification of Korea.

Second, the President is the chief administrator and thus enforces the laws passed by the legislature while issuing orders and decrees for the enforcement of laws. The President has full power to direct the State Council and a varying number of advisory organs and executive agencies. He is authorized to appoint public officials, including the Prime Minister and heads of executive agencies.

Third, the President is the commander-in-chief of the armed forces. He has extensive authority over military policy, including the power to declare war.

Fourth, the President is the chief diplomat and foreign policy maker. He accredits or dispatches diplomatic envoys, and signs treaties with foreign nations. 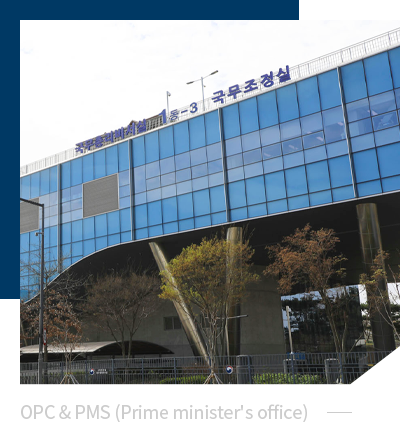 Under Korea's presidential system, the President performs his executive functions through the Cabinet made up of 15 to 30 members and presided over by the President, who is solely responsible for deciding all important government policies.

In addition to the Cabinet, the President has several agencies under his direct control to formulate and carry out national policies: the Board of Audit and Inspection of Korea, the National Intelligence Service, and the Broadcasting and Communications Commission. The heads of these organizations are appointed by the President, but the presidential appointment of the Chairman of the Board of Audit and Inspection is subject to the approval of the National Assembly.

The Board of Audit and Inspection has the authority to audit the financial accounts of central and local government agencies, government corporations and related organizations. The board is also vested with the power to inspect abuses of public authority or misconduct by public officials in their official duties. The results of audits are reported to the President and the National Assembly, although the board is responsible only to the chief executive.

The National Intelligence Service is authorized to collect strategic intelligence of internal as well as external origin and information on subversive and international criminal activities.

It also plans and coordinates the intelligence and security activities of the government.

The Korea Communications Commission comprises five standing members who run the committee on consensus-basis. It's a Korean, central administrative organization that carries out works necessary to maintain the independence of broadcasting, regulate broadcasting and communications and to protect the users.